Knowing Me, Knowing You: Casey Jones 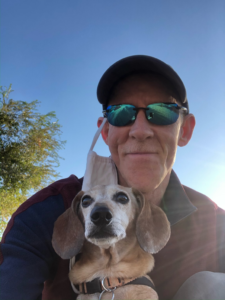 I received my positive diagnosis the second week of July 1992. At the time, it never occurred to me how that would change the trajectory of my life, or that I would have a life.  I was given until the ‘end of the year.’  I was living with my spouse (“Sam”) of almost seven years, who I consider my soul mate and remains to this day my closest friend despite our HIV-generated breakup in 1996.  There was a Mr. Wonderful prior to Sam and that lasted about two-and-a-half years.  I was extremely sexually active before, during, and after Mr. Wonderful, until I met Sam.  In fact, I would say sex is my addiction–I was always looking for a fix (after all it WAS San Francisco in the late 70s and 80s!). It wasn’t until years later I learned Mr. Wonderful had HIV and, after adding up my behavior, nuances in my health, infections, and our intimacy, I mapped my HIV infection to 1983.

In hindsight, the idea planted by my well-respected doctor that I would be dead by the end of the year (1992) was ludicrous.  Clearly, I had been infected way before I got tested and I kept breaking every mental milestone and mental shackle and restriction I kept placing on myself.  So, now that we all knew I was infected I was going to suddenly die?  Hmm…

HIV has been the driving force to almost every significant decision I’ve made in my life. It consistently runs my thought and decision making process consciously and subconsciously.   HIV has definitely held me back and at other times pushed me forward with focus and determination.

I accelerated my dream (and our dream) of owning a hotel and even though Sam and I had broken up years before, we both agreed we would not let go of our dream.  So, with years of surveying the market and searching for the right place and doing my operational due-diligence, and driven by the fear of not being able to realize my dream before I died, Sam and I threw everything comfortable (careers, income, and friendships) out the window and moved to Palm Springs with a deal to be Managing Partners (and investors) in a partnership with a person who I didn’t research thoroughly. And, that partner eventually was the fuel to our financial demise (it would have been prudent to throw in the towel the day after 9/11).

Our (first) financial collapse robbed us of our retirement.  The silver lining was giving my body a rest.  When we left the hotel I quickly realized how I had ignored my health and how bad of shape I was in.  Finding great healthcare in Palm Springs was a challenge in the early 2000s.  I was referred to a doctor (she) in Garden Grove who got me back on track after years of monthly visits and barely got me into into a drug trial–I was on my last leg with meds and had run out of options.  I am still on that same cocktail today some 15+ years later(!).  To say I am fortunate would be a gross understatement.

A business associate turned me on to clean eating and I totally changed my nutrition. Then I started working out like I was going to the Olympics for 6 years. Little did I know, I was entering the worst part of my depression. At one point I had finally figured out my next logical step would be to kill myself.  I figured I didn’t have anything to offer or to look forward to so what was the point?  What buoyed me and lifted me up was my physical routine. That routine saved my life emotionally. It hasn’t been until last year that I feel like I’ve completely dug myself out of the hole financially and emotionally, after fifteen years.

For everything shitty that happens to us, there’s something good that comes out of it. Always! I was hell-bent on starting the business in Palm Springs because my time was running out.  It was the biggest professional growth period of my life, for many reasons including the opportunities to be involved at the civic level.  I liken it to being pushed into the deep end of the pool with cement blocks attached and making it out alive.  There’s been a lot of good things that came out of my pushing myself to get to here. There’s a lot more clarity in where I’m going and what I expect of myself and others around me.  I’m now enjoying a second career which is awesome!  And LKAPS (all of you) has become an incredibly important part of my support system.  I’m grateful and fortunate.  Keep making me laugh!