Knowing Me Knowing You: Ken Vergonet 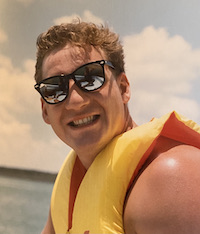 I remember going to the mandatory mass HIV testing site, which was at the Airmen’s Club across the street from my work center. I walked over terrified because I knew I had put myself at risk, but it wasn’t something you talked about back then.

When I went into the test site, I sat down and the nurse could literally feel my fear. She knew something was wrong, but managed to fill a test tube with blood. OK, that was done!

I resumed my “normal” military life. Six weeks went by and I thought I was in the clear. Thank goodness! No news really is good news! I swear the universe was listening, and it wasn’t long after that I received a sticky note on my office tray: Call the doctor at this number. I called and was told I had tested positive.

I was devastated. I felt like everyone knew, but this all had to be kept a secret. So now I’m hiding that I’m HIV+ and thinking I’m going to die tomorrow. My commander repeatedly called me in his office, determined to get answers. I managed to endure all of that.

I was medevacked to Wilford Hall Medical Center in San Antonio, Texas. If you’ve ever flown military medevac, you know you fly all over the country in an airplane ambulance until you reach you destination. I arrived, my spirit broken and feeling terrified. I was given expired AZT, and when I asked about it, they said “it’s all we have.” I wondered what would come next.

I walked into Ward 7Charlie (7C). It was a regular military hospital. The other patients would walk by and smile. They were from Air Force Bases all around the world, all men, and my age too. Hmm…could it be… OMG! Everyone is gay! I couldn’t believe it! Shhh, don’t tell anyone but everyone here is gay!

When I had a moment to myself, a fellow patient pulled me aside and said “Don’t tell the doctors you’re gay.” The doctors were relentless – every weak moment, and every time you’re alone with them…“How did you get this” or “Are you sure there isn’t something you want to tell me?”

Sharing our stories helps all of us feel less alone. In our “Knowing Me, Knowing You” feature, we’ll get to know one of our fellow members. We encourage you to email us at news@LKAPS.org to contribute your story.